A downloadable game for Windows, macOS, and Linux

What makes someone perfect?
Experience this short bittersweet story in the shoes of the main character, Jung, where you will spend your time hanging out with a girl named Ai. Ai is everything Jung wishes for in a woman... except for one very important thing. A thing he prefers to disregard in order for them to have the best time of their lives.
You have a day to enjoy your date and see the world from Jung's point-of-view.

To be honest, the biggest reason I checked this out was that there was a Swedish translation (the VNDB list of VNs in Swedish has just six entries and one is a dead link...). Haven't gotten far enough into the game to give it a proper rating, but I just have to ask something first:

Was this machine translated? The phrasing is really off at some points due to overly literal translations (such as "Jag håller i min haka med min högra hand som om jag tänker efter" - you would normally write "som om [...]" with [...] in past tense even if the first is in present, and due to the word choice the first half comes off like he is grabbing his chin rather than just holding it gently.) Considering how old the game is I understand if you don't want to go back and change that. But if you want to add Swedish translations to your future releases, I would really urge you to either invest in/find a volunteer translator to help, or at least someone willing to edit the machine translation first.

l'm a Chinese STEAM player who have played the game and now is playing its sequel--Carpe diem reboot.Indeed it's a short game,but leaves a strong impression on
me.

Though,as you say,It's a bittersweet story,l'd like to play it and its sequels(Yes,l expect more sequels!).Moreover,l will be more than willing to recommend it to my friends!

Carpe diem may be not the best visual novel,but must a extraordinarily impressive one to me!!
So,wish you could bring us the players more surprise!
Thank you for making this game and all the pleasure it brings to me!!
(Weak in English,plz ignore the mistakes)

Thanks! I'm glad you liked it.  I'd love to make more sequel, but we'll see if there's enough interest for it and if budget allows.

Yeah,I know the budget does really matter for every independent game developers……

I don't know about the Western game's market.But now in Asia,the visual novel is not as popular as several years before.There are only few great and well-known companyies'game will be a great hit,while most of games will be forgotten and may just get the developing money back……Or the game can produce some meme(we Chinese call it "geng" or "neta" in Japan)in the Internet to become hot……It's a pity but it's true.

Yours games are good in quality. The Carpe diem has 7,154 Chinese comments in the Steam,and almost all of them  highly praise it.Even the negative comments are mostly criticizing the Chinese translation.So I think you can be confident about your games and yourself XD.

The sequel Reboot is even greater,but it doesn't gain the attention as the previous work in Chinese.I think there are two reasons.Firstly,it doesn't have the Chinese translation.Though the pre-work's translation is regarded as terrible,it does work.I have to say my English is above the average in my contemporary.However,to understand the text,I have to use the Internet dictionary to read slowly. Then,if I hadn't searched the pre-work in the Internet,I wouldn't be able to know it has the sequel…The players aren't unwilling to play the sequel,maybe they just don't even know.

Though I say that the Asia visual novel's market is declining,it still one of  the best game forms for Otaku(maybe the"Geek"in English?).We still enjoy it and regard it as a bizarre and wonderful experience.

Again,thanks for you and your games,good luck!

how much time did you guys use on the makinh of the game? I LOVE IT BTW ^-^

Thanks! About a month or two, on and off.

I am new to this but did you make this anime?

It's just a visual novel. And yes, I created this one.

But hey is it okay if you tell me a good website to make a visual novel cause i cant find any?

You can search up ren'py. That's what I use.

The theme was great, did you make it? I would like to learn how to play it on piano. Do you have sheet music?

Hey. Thanks. Yes, I did. Sadly I composed it throught fruityloops so i have no music sheet for it.

I read your vn and I let the feels flow through me.
Very nice work. It looks like a professionally done visual novel. Good.
And...did you do all the art? It's actually very good.

Yeah, I did all the art. The backgrounds weren't really as good as I wanted them to be because, I'll admit, those were rushed. Thanks for reading it! 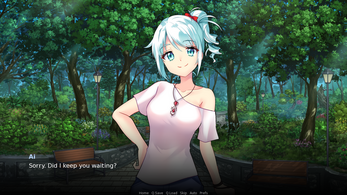 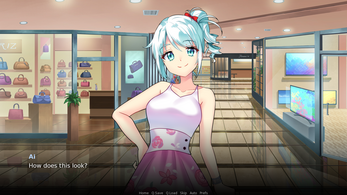 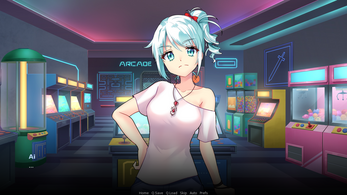 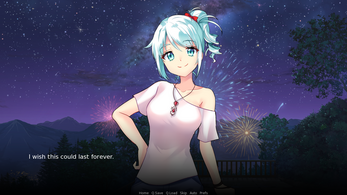 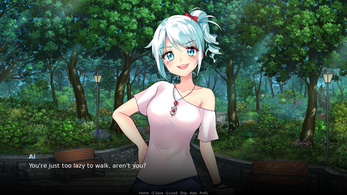